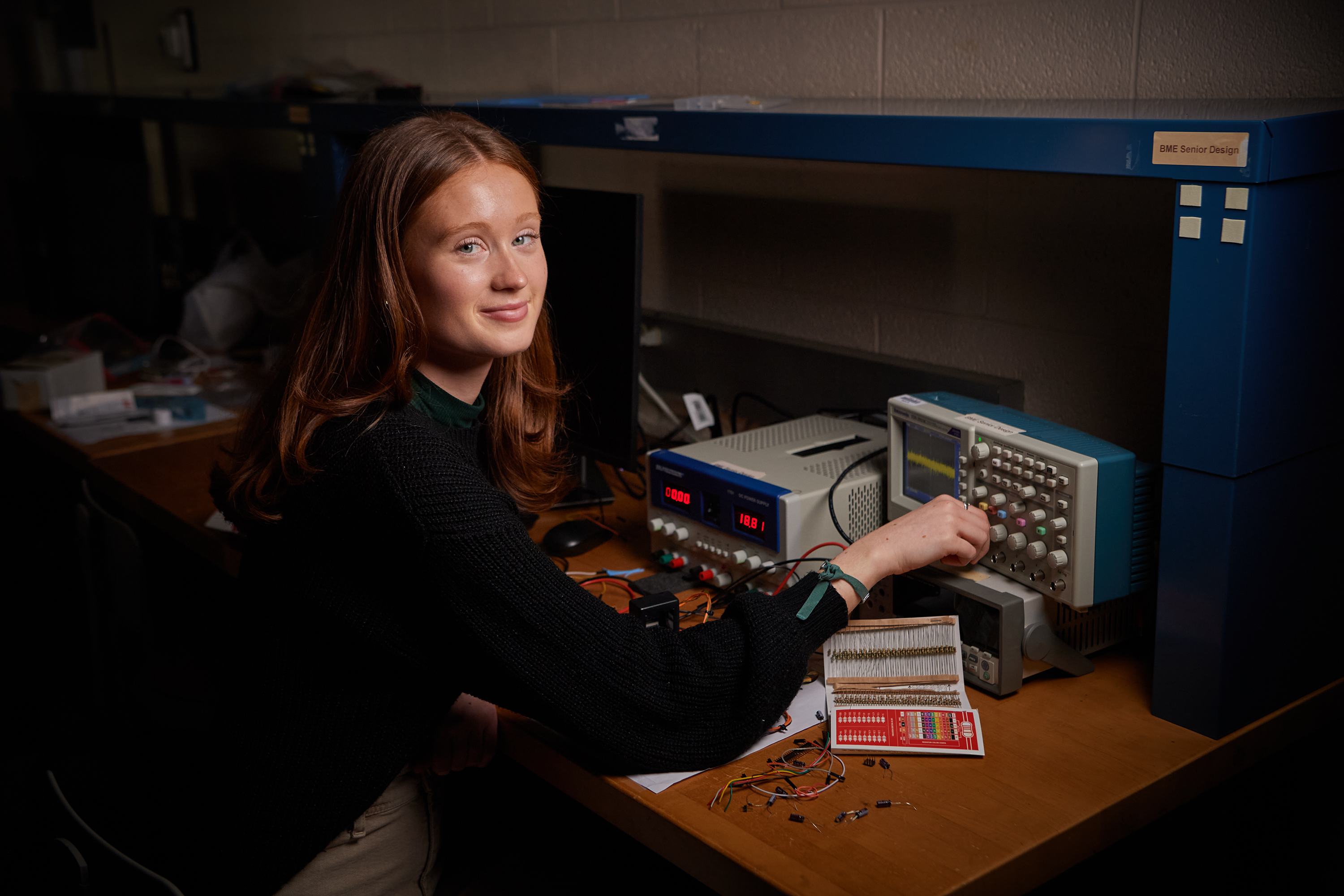 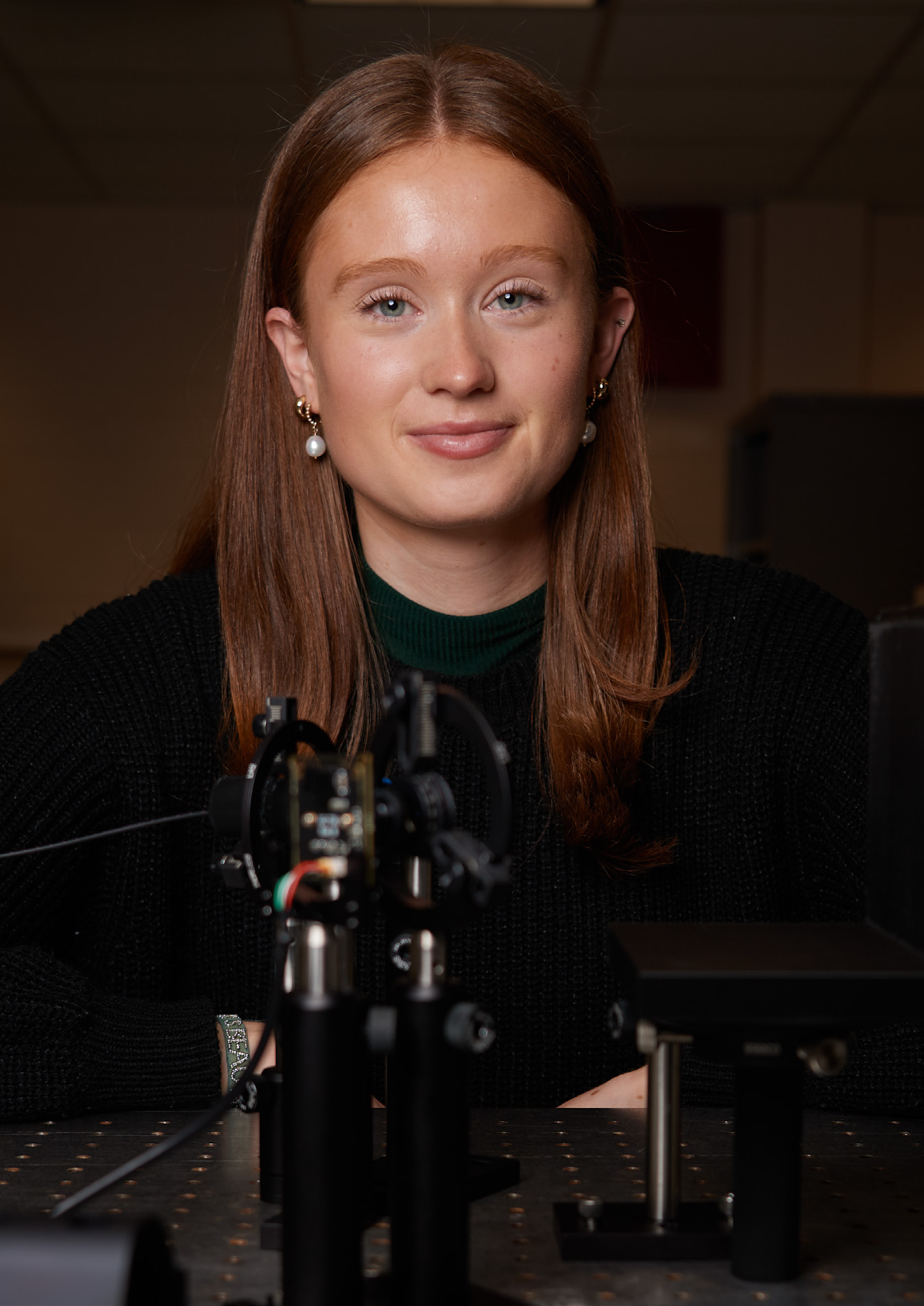 It’s no surprise that Courtney Luker ’22 (ENG) enjoyed Playmobil when she was a kid. Lots of children do. But not too many mention their devotion to this iconic, people-centric, role-playing, let’s-build-something-fun collection on their college applications. She did.

A native of Glastonbury, Connecticut, Luker will graduate with a degree in biomedical engineering in May. And yes, her father is an engineer. And yes, her sister Kelly graduated from UConn with a degree in chemical engineering in 2012. Both have been good role models. But Luker’s interest in figuring out how things work by taking them apart and putting them back together again was obvious from the time she was a toddler.

She laughs when she describes one of her nascent experiments that involved making a snow sled from cardboard and duct tape she found in the family garage, and then using her creation in an attempt to slide down Buttonball Hill in her hometown. “That experiment,” she says with a sigh, “did not go particularly well.”

After two years of summer internships with medical device company Medtronic, Luker has accepted a full-time position with the company following graduation. She’ll begin a two-year rotational program in their medical surgical department in North Haven, Connecticut. That will be followed by further experience the following year in either Boston or Boulder, Colorado. An avid hiker, she says Boulder sounds enticing. Then again, she considers herself an “East Coast person,” so if Boston wins out, that’s okay, too.

Luker is part of a growing contingent of women entering the engineering profession. She says she’s proud of UConn’s commitment to eliminating gender inequality in this field, and also of the fact that women make up 31% of this year’s freshmen engineering majors — the highest percentage to date.

She’s quick to point out, however, that, “It’s 2022. It’s crazy that being a woman in engineering is still such a big deal.”

As president of the UConn chapter of the Society of Women Engineers (SWE), Luker is intent on paying it forward to honor the upperclassmen who helped her get acclimated when she arrived on campus in the fall of 2018.

“I can’t tell you how much I appreciated the women in SWE who mentored me when I was new to UConn,” she says. “I asked them all sorts of questions, from what to wear to interviews for internships to advice about courses.”

Luker talks about how it felt, in her second year, to be one of only three women in a discussion/lab section of an electrical engineering course. “To be honest, that was intimidating. But with the support and encouragement of junior and senior women, I made it through. That’s something I’ll never forget.”

Now she’s intent on mentoring other inquisitive girls and young women who are considering engineering as a career. One way she does that is through Multiply Your Options, which reaches out to 8th-grade girls in local schools, providing demonstrations and hands-on exposure to various engineering disciplines. “With more programs like this we can continue to decrease gender inequality in engineering.” Thanks to her experiences with SWE, Luker has been inspired to be what she calls “the best version of myself.” To that end, her immediate goal is to become an expert in medical product development, and ultimately share her knowledge with surgeons in hospital settings.

But, she adds with a smile, “I’ve really enjoyed the management side of being a leader — in SWE — and helping people perform their duties. I’m now actually thinking that an MBA might be in my future, too.”